Octogerian president, Abdelaziz Bouteflika, like the rest of Africa’s thriving despots, had wanted to run for the fifth time in office. But the Algerian people decide they have had enough of tyrants and hypocrites.

Algeria’s longtime president has conceded to popular demands to abandon his re-election bid after three weeks of massive protests rocked the North African country of 41 million.

But a giant question mark now hangs over what happens next, leaving Algerians and investors alike — particularly those in the oil and gas sector — mired in uncertainty. 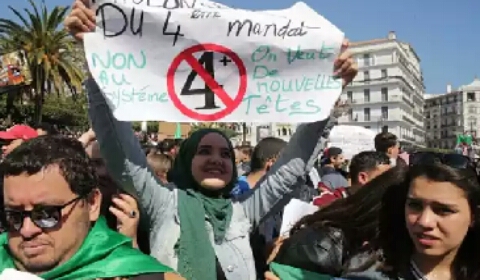 No fifth term for the Arab despot

“There will be no fifth term,” a statement from 82-year-old President Abdelaziz Bouteflika, who is in his 20th year in power but has rarely been seen in public since suffering a stroke in 2013, said on Monday.

Silent throughout the Arab Spring, Africa’s largest country and third-largest oil producer erupted in protest in late February after its ageing president announced his fifth re-election bid. The protests, leaderless and largely peaceful, represented a wide cross-section of society including students, teachers, lawyers, and the working class.

In a televised address, Salah, the army chief, said he considered the people’s demands to be valid and that the presidency should be vacated.

Under Article 102, the Constitutional Council could determine that the president is too ill to fully exercise his functions, and ask the parliament to declare him unfit. Bouteflika has rarely been seen in public since suffering a stroke in 2013.

If a two-thirds majority of the parliament’s lower and upper house ratify the council’s decision, the chairman of the upper house, Abdelkader Bensalah, would serve as caretaker president for at least 45 days.

The army chief is among the top power brokers in Algeria and his announcement could pave the way for Bouteflika’s removal.

Angola For Culture of Peace in Africa