The al-Shabaab Islamist group claimed its fighters were responsible for the explosions and gunfire at the DusitD2 hotel complex.

Police said the attack had begun with an explosion in the hotel car park and a suicide bombing in the foyer leaving a number of guests with severe injuries. 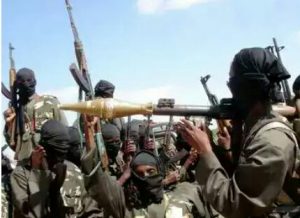 In 2013, al-Shabab extremists killed dozens of people during a days-long siege at Nairobi’s Westgate shopping centre, which is just over a mile away from the DusitD2 hotel.

A total of 67 people died in that attack.

Kenyan troops were among the African Union alliance forces that drove al-Shabaab out of Mogadishu, Somalia’s capital, in 2011.

The group, thought to have between 7,000 and 9,000 fighters, has been affiliated with al-Qaeda since 2012 and subscribes to the ultra-conservative Wahhabi Islamic creed.

Tuesday’s apparent attack took place three years to the day after al-Shabaab attacked a Kenyan military base in Somalia, killing scores of people. The group objects to the presence of Kenyan troops in the turbulent Horn of Africa nation.

In December of 2015 a group of Muslims protected Christian passengers when suspected Islamic extremists ambushed a bus in Kenya, according to eyewitness accounts.

The attackers had ordered people off the vehicle in Mandera before telling them to split into groups of Muslims and non-Muslims. The Muslims refused their demands – daring the alleged extermists to kill them too, according to the Kenyan Daily Nation.

Culled from The Independent

Zimbabwe: A foretaste of the crocodile

Kenya: Another African Dictator goes to meet his...