Lots of political wheeling and dealing included with selling out Western Sahara to Morocco and Islamic nations normalising diplomatic recognition for Israel have led to United States delisting pariah Sudan from the US terror blacklist.

As part of Israel deal, US officially delists Sudan as state sponsor of terror

KHARTOUM, Sudan — The United States on Monday formally removed Sudan’s designation as a state sponsor of terrorism, 27 years after putting the country on its blacklist, the US embassy in Khartoum announced.

The move accompanies Sudan’s recent normalization of ties with Israel, which was brokered by Washington. Sudan confirmed in October that it had agreed to the deal in exchange for being removed from the US terror blacklist, acknowledging for the first time the existence of linkage between the two, which it had previously denied.

“The congressional notification period of 45 days has lapsed and the Secretary of State has signed a notification stating rescission of Sudan’s State Sponsor of Terrorism designation is effective as of today (December 14), to be published in the Federal Register,” the US embassy said on Facebook.

US President Donald Trump announced in October that he was delisting Sudan, a step desperately sought by the nation’s new civilian-backed government as the designation severely impeded foreign investment. 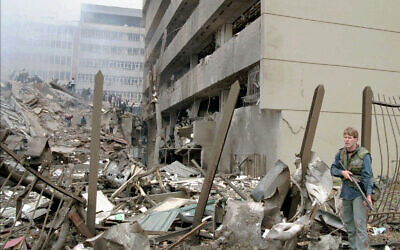 A US Marine officer stands guard outside the American Embassy in Nairobi, Kenya, after a huge explosion ripped apart the building on Aug. 7, 1998 (AP Photo/Sayyid Azim)

As part of a deal, Sudan agreed to pay $335 million to compensate survivors and victims’ families from a 2000 attack on the USS Cole off Yemen’s coast and the twin 1998 attacks on US embassies in Kenya and Tanzania, carried out when dictator Omar al-Bashir was welcoming al-Qaeda and hosting its then-leader Osama bin Laden. One of the chief planners of the embassy attacks, Abdullah Ahmed Abdullah, was killed in Tehran earlier this year, allegedly by Israeli agents.

Sudan’s transitional government, which took over last year following Bashir’s overthrow, also agreed to recognize Israel, a major goal for Trump, although Khartoum has sought to downplay the connection.

Trump sent his notice to Congress on October 26 and, under US law, a country exits the terror list after 45 days unless Congress objects, which it has not.

The African country became the third Muslim-majority state — after the United Arab Emirates and Bahrain — to move to normalize relations with Israel since the summer. Another US-brokered normalization deal with Morocco followed last week.

Sudan’s removal from the terror list and the legislation it is hoping will pass in Congress would be a major boon for the country. Sudan has been looking to revive its battered economy and rescue its transition to democracy, following a popular uprising last year that led the military to overthrow longtime autocrat Omar al-Bashir.

The transitional government has been struggling with a huge budget deficit and widespread shortages of essential goods, including fuel, bread and medicine. Annual inflation soared past 200% last month as prices of bread and other staples surged, according to official figures.

The designation of Sudan as a “state sponsor of terrorism” dates to the 1990s, when the nation briefly hosted bin Laden and other wanted terrorists. Sudan was also believed to have served as a pipeline for Iran to supply weapons to Palestinian terrorists in the Gaza Strip.